After our early start on our second day in Luang Prabang, we slept a little, ate some breakfast, and then looked into options for getting to the Kuang Si waterfall. We could go by tuk tuk (most expensive, but probably great if you’re traveling with a group), by van (cheapest, but on someone else’s timetable) or by motorbike (slightly more expensive than van, but with the freedom to come and go as we please).

We opted for the motorbike, and like with our Tasmania adventures, I gave Thomas the task of driving. This turned out to be an amazing choice. The journey there was beautiful, and we felt so much freer than if we’d been trapped at the back of a hot van with a bunch of strangers.

We paid the entrance fee to the waterfall and walked in and saw the most beautiful shade of water. I couldn’t think of how to describe the color, so I called it “cotton candy blue” but I think it really reminded me of the sort of pastel (probably Disney-themed) fruit snacks I used to buy all the time.

Do you ever see a picture of something, and you think “ok, I’m sure it’s great, but that photo has clearly been over edited because it can’t possibly look like that in real life.” Well, I’d seen a photo or two of the water/lesser falls, and I kind of assumed reality wouldn’t live up to the photos. But around every turn was a new surprise. First shock was that crazy blue water.

The falls were pretty crowded, but we hiked along the less traveled side, and I think we saw one other person. It was nice and cool, and we sat for a while and ate some mangos and sour cream and onion Pringles. A winning combination, I know.

Eventually, we got to what I realized were the actual falls. Photos can’t quite capture it, but I tried anyway. 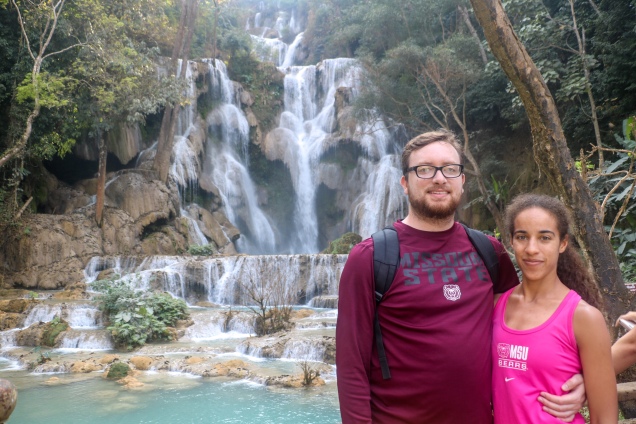 Eventually, we decided to hike to the top of the falls. The path was very steep and dusty, so I had to be careful not to slip and tumble down.

We made it to the top, and as you can imagine, there wasn’t a lot to see. The best view of a waterfall is always in front of it. 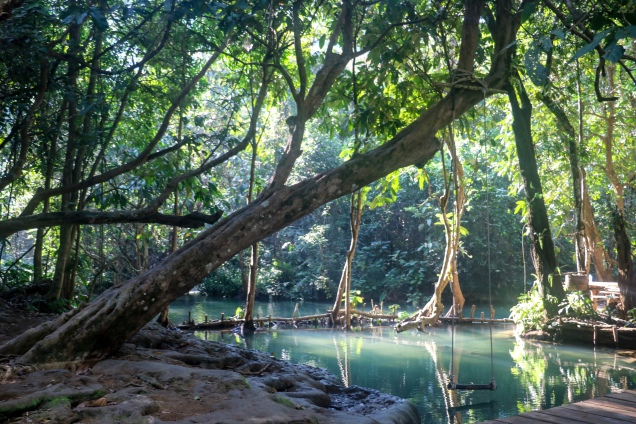 We hiked down the other side, which was much less steep and much less slippery, and saw some waterfalls that honestly look like a digital rendering of a waterfall that Windows would use as a default computer background.

Then we found a place to swim. The color of the water makes it seem like it may be sort of warm or inviting. Don’t be fooled: It was freezing, at least until we fully submerged ourselves.

I wanted a photo in the water, so Thomas got out and took many. From different angles. For someone who says all the pictures look blurry when he takes them, he does a pretty stellar job, don’t you think?

Finally, we left and rode our motorbike back to Luang Prabang. We meant to come back a little earlier and try to get some sunset pictures and some pictures of Wat Xieng Thong in the daylight, but it was pretty dark by the time we got back.

The temple is pretty stunning though, so I did my best in the low light. 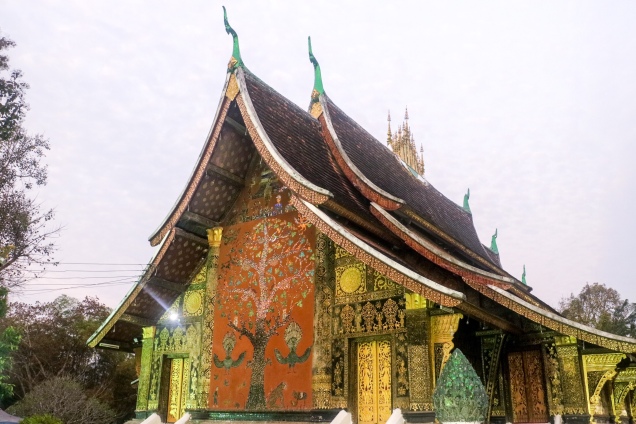 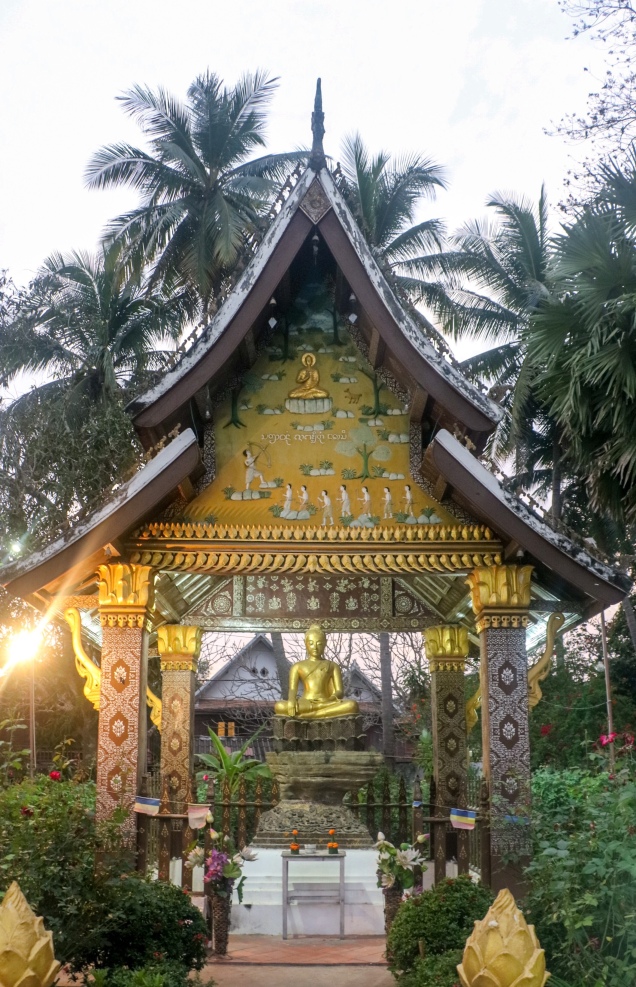 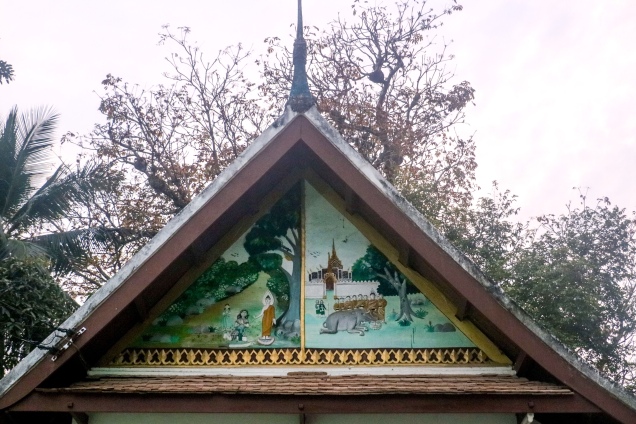 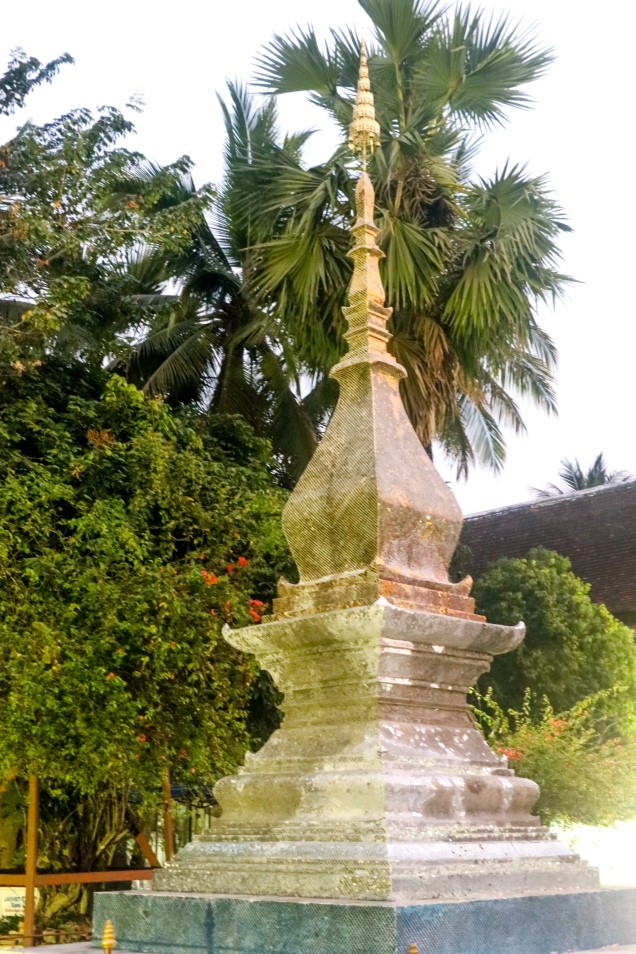 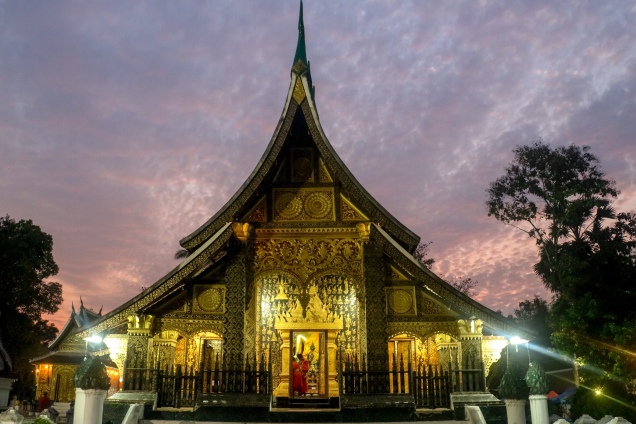 Well, that’s all for now, folks. Sadly, our vacation has come to an end, and we’re flying back to China tomorrow. I’ll try to keep you posted on the more humdrum details of my everyday life, but I’m hoping that we’ll also have at least one more vacation that I can write about before we come back to the US!

Leave a comment if you want. I always enjoy reading them ❤️

Yesterday, I posted Part 1 of my Laos trip. I had really no plans or expectations going in; most of the stuff we wanted to do was in Cambodia, and we mostly decided to go to Laos because it seemed less touristed than Thailand and Vietnam. Turns out, Luang Prabang was really special, and I’m not even sure I can explain why. I love places that seem easy to explore on foot, I love being surrounded by nature, and I love being surprised by beautiful things. Luang Prabang had all of this and more.

Thomas and I started our day at 5-something a.m, when we woke up to observe the Sai Bat, or morning alms. During this ritual, people offer food to a procession of monks.

I have a lot of thoughts, which I haven’t quite figured out how to articulate. Firstly, I’ve been thinking about different definitions of the word “observe.” One can observe something by seeing it with their eyes, and one can observe something by feeling it in their heart, right? To observe a religion means to dedicate yourself to it and practice it, but we can observe other people practicing their religion. I have mixed feelings about this, because on one hand, seeing is one step towards understanding, but on the other hand, watching other people’s sacred religious traditions feels strangely intrusive. Photographing it feels even more so.

I don’t know. I try very hard to be respectful of others, especially when I am an outsider looking in. Observing, photographing (without flash), and even participating in the Sai Bat is welcome, at least according to signs I saw posted around town. And like Angkor Wat, Luang Prabang benefits from tourism…but to what extent is our presence doing more harm than good? How do locals, monks, devout Buddhists feel about swarms of tourists encroaching on their sacred practices, observing without truly observing?

I’m trying to think of an example that may feel relevant to most Westerners, but somehow much of the behavior I assume is disrespectful doesn’t have much direct equivalent in my mind. Maybe I’m overthinking it, but it seems to me that most of these places were colonized, and then gained independence, and are now being reentered by privileged citizens of colonizing countries who want to be a part of things that shouldn’t involve them anymore. I feel like there’s a fine line between appreciation and appropriation, and I don’t always know where that is.

Anyway, the only example I can think of is non-Christians taking communion? But even that doesn’t seem as problematic to me as the way that we may “appreciate” non-Western cultures and religions.

For example, many temples will allow visitors to enter them. Thomas and I went to a nearby temple after sunset yesterday to see if we could get some photos (it’s seriously beautiful.) I walked around to get a photo of one temple (from a good distance, so I could capture the whole building and some sunset.) Anyway, I got one picture, and as I took it I noticed that there were monks gathered inside, sitting on the floor. Then a couple comes up in front of me, walks up the steps, and proceeds to stand in the doorway taking pictures. When I say in the doorway, I mean a medium gust of wind could’ve pushed them inside and into the monks.

Now, I’m not going to pretend to be any kind of expert, but this struck me as pretty disrespectful. I’m already pretty iffy on my own behavior, but gosh, I like to think that my presence at least wasn’t disruptive? I literally would never have dreamed of walking up the stairs, let alone sticking my head in the door while people were in there. To what extent does this sort of observation lead to deeper understanding?

I’m asking a lot of questions that I don’t have the answers to. I guess we just have to try to be respectful within the boundaries we’re given. For this trip that’s meant dress modestly, don’t disrupt the procession, no flash photography. Don’t climb on the ruins, take off your shoes when you enter the temple.

I was initially going to write about my whole day, but I went on a bit of a tangent, so I’ll split this post and continue it tomorrow. Full disclosure, I did take one photo from the morning alms, but I decided against posting it (for the record, it was pitch black and the photo is not great.) If you’re interested in a visual, search for alms giving Luang Prabang and there will be plenty of images from people who were either here at a sunnier time of year or used their camera flashes.

I’m super excited about tomorrow’s post. It’ll be full of photos and very few of my personal opinions.

I will end with a the photo I took before the tourists stood in the doorway. If you look closely you can see the orange-clad monks sitting inside.

After our days in Cambodia, we flew to Laos. We took a microbús to Vang Vieng, and fun fact, both Thomas and I experience motion sickness. We were traveling during the hottest part of the day, and we both felt terrible during the drive, but luckily neither of us had any unfortunate incidents. All we did in Vang Vieng was relax, but then we made our way to Luang Prabang in yet another microbús. This time, we got to drive through mountains, on bumpy, hilly, curvy roads. This obviously spelled disaster for two people who have histories of carsickness, and when we stopped for a bathroom/snack break about an hour and a half into the journey, I lay my head on the table, convinced that I wasn’t going to make it 5 hours without vomiting. For almost the entire journey, I cradled a liter of cold water, trying to fend off the nausea. Thomas and I didn’t talk for the entire trip, but when we finally got to Luang Prabang, we both said it was a miracle that we didn’t puke in the van.

On our first full day in Luang Prabang, we mostly wandered around and explored the city. The city is pretty small (at least from my perspective) but it has dozens of temples. Compared to others I’ve seen, these are very…sparkly? It’s hard to capture the sparkle in a photo, but I tried.

Wat Pathouak apparently has a pretty cool mural inside, but I didn’t go in. 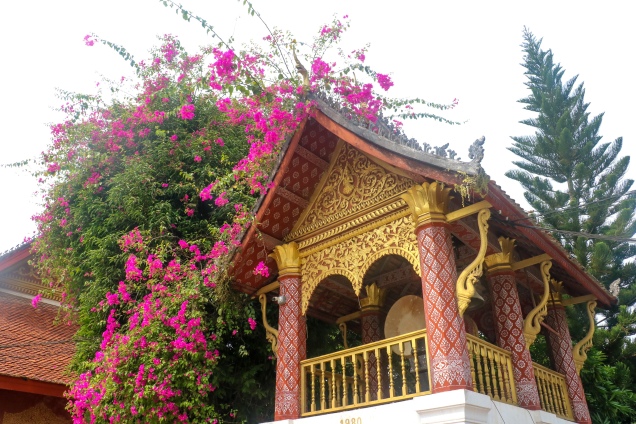 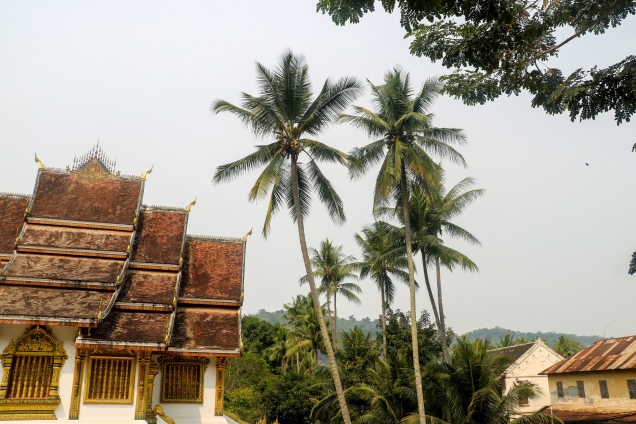 There was a man pulleying coconuts down from the tree on the right. Maybe if you look really closely you can find him.

We wanted to go to the top of a hill (mountain?) to watch the sunset, but it was really cloudy so we decided to skip it.

I’ll write about day 2 in Luang Prabang in a separate post. It was one of my favorite days from this vacation!